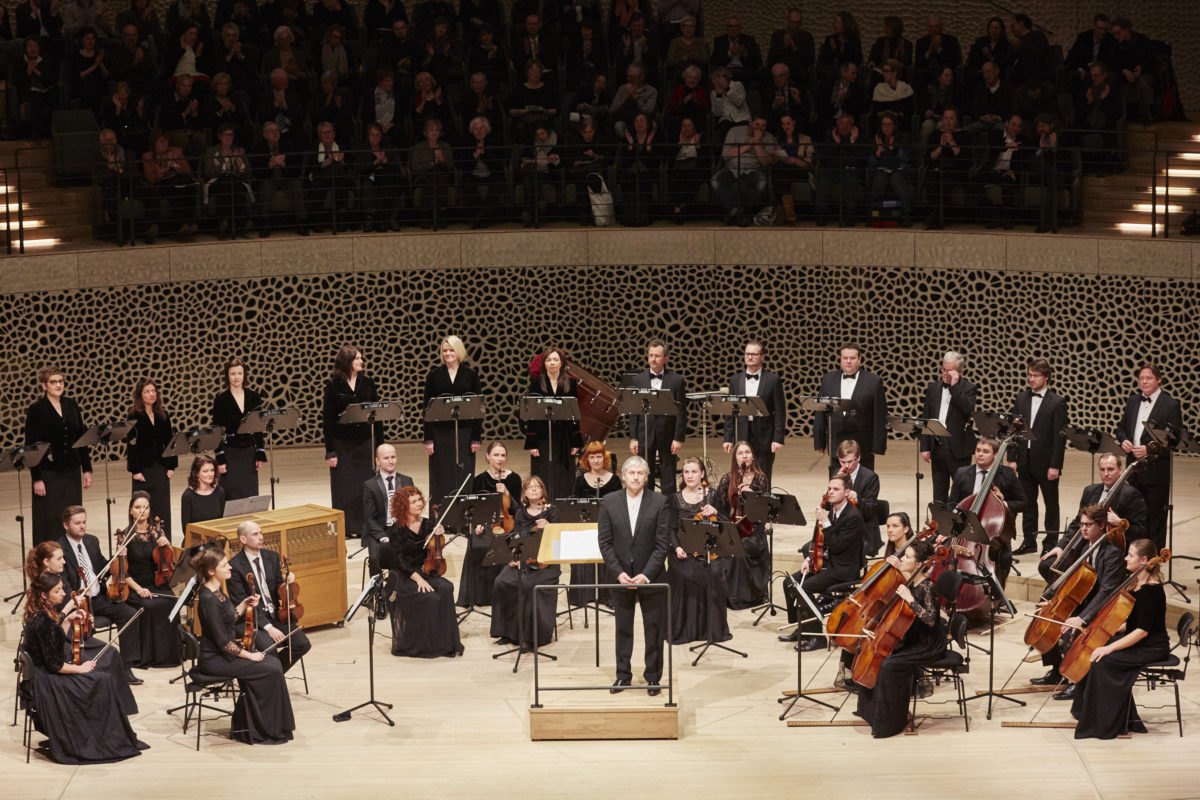 The music is permeated by little breaks –the spacious concert hall of the newly opened Elbphilharmonie in Hamburg, Germany is filled with a deep silence. The vocal collective unfolds its tunes episodically: out of a surface evolves a space. The violines sound like ice cristals blown up by the wind– clingingly and sparklingly beautiful. Beneath all that – a deep infinite sound flowing out of the double basses, covering the world under a warm and comforting blanket.

These are some of the impressions from Thursday night’s concert „music for the soul“ in the Elbphilharmonie – the opening night of the music festival „Lux aeterna“. Different concerts and cultural events will be held all over Hamburg during the next couple of weeks, all unified by one motive: the spiritual and transcendental power of music.

Musically, the opening night was all about Arvo Pärt (*1935). The Estonian-born Pärt is one of the most successful contemporary artists. He has tried out many different musical styles over the last decades. Thursday nights concert, however, focussed on his deeply religious works, influenced by the composer’s own spirituality. With their simplicity and honest sensuality they are just made for a festival of music for the soul.

The musicians of the evening are from Riga, Lativa, and they are real „Arvo-Pärt-specialists“. Only in 2014 the Latvian Radio Choir and the Sinfonietta Riga won a Grammy for their recording of Pärt’s piece Adam’s Lament. They sometimes even work together with the composer himself – a rare and wonderful present, as some musicians told klassik-begeistert.de.

With their magical sounds the 23 musicians and 24 singers soon fill the huge space of Hamburg’s new „sound-cathedral“. Sometimes they perform collectively, sometimes it’s just the choir alone, sometimes only the men. Nine compositions which couldn’t be more different in length, expression and meaning.

Right in the first piece – Solfeggio – the choir proves that the human voice is actually the most beautiful instrument of all. Clear as a bell or profoundly deep the singers flow over the scale of C major: melting together, complementing each other and rubbing against each other’s consonance one can strongly feel the delicate intonation.

Fratres, which has various adaptions and instrumental arrangements, was played with solo violine, string orchestra and percussion. It captivates with formal simplicity – an extensive tone from the double bass versus a repetitive and animated melodic movement in the violins – and a stunning dynamic tension.

The pieces Nunc dimittis, Salve Regina und Da pacem Domine right before the break reflect Pärt’s deep faith and how he translated it into his musical language. The music is unique in how Pärt brings together modern sounds and traces of the traditional powerful Gregorian chant: plain but not simple, floatingly light and still grounding.

The second part of the concert comes with an orchestral piece: two short songs and probably the most versatile and complex composition of Thursday’s programm: Adam‘s Lament. Over words by the Russian Holy Siluan von Althos (1866-1938), beautifully sung in it’s Russian original, a contrasting mixture of various sounds slowly unfolds: monotonic yet virtuos, coarse yet velvety in its expression.

The Latvian Radio Choir as well as the Sinfonietta Riga perform this music touchingly beautiful. Each protagonist on stage contributes to the transparent, floating sound structure that is being formed and kept together by conductor Sigvards Klava. Calm but still full of tension, he steers them through the music and they follow his lead almost always with surprising conformity and perfection. Together they breath the music.

Enthusiastic applause for the musicians from the other end of the Baltic Sea! Pärts devout music reached and touched almost everyone in the audience on this evening. One could sense the hypnotic and spiritual power of the music. Yet, it was not always possible to completely immerse oneself into the music and escape the concert‘s reality. For that kind of programm the great concert hall might just be to spacious, the audience to restless and unfortunately far too much coughing and sneezing.

While the opening nights of the last two festivals took place in Hamburgs main churches (2013 St. Michaelis, 2015 St. Katharinen), it was sure to be the newly inaugurated „sound-cathedral“ this year. The building might be as impressive as a cathedral, but the acustic couldn’t be more different. Even though they only had one day of rehearsals in the new surroundings, the musicians knew how to use it’s advantages for their own musical benefits. It is wonderful how the transparency and immediacy of he hall’s acustic carries the individuality of the music. Still, during the concert, one could not help and sometimes think longingly of the breathtaking reverberation of sacral buildings, sounds that go right into the depth of your soul.